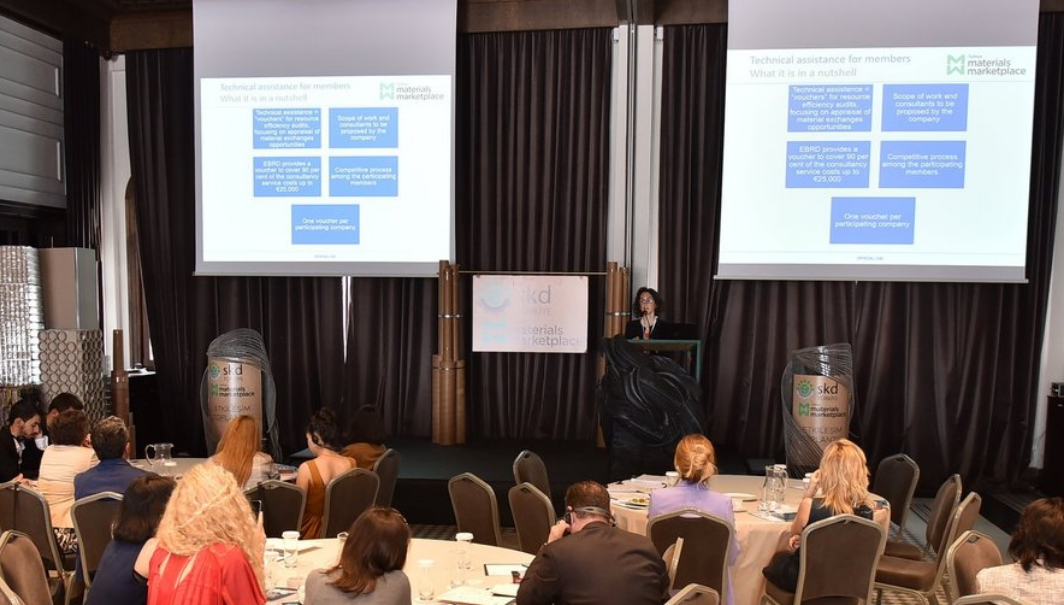 The 3rd Network Meeting realized on the 1st of June, played a significant role in extending TMM’s sphere of influence since the scope of both audience and event program was enlarged with entrepreneurs, SMEs and authorized institutions. Also, this event hosted the launch of EBRD’s Circular Voucher Scheme through which the number of member companies and the synergies are expected to increase in the near future.

The meeting was started with the opening speech of Ebru Dildar Edin, the Head of Board of BCSD Turkey. Mrs. Edin started her speech by thanking the current TMM members and other parties, who have been supporting the Project since its development process. She then explained why circular economy should be at the top of all business activities with the help of specific data and analysis by referring to “Waste to Wealth”, written by Accenture Strategy and lately translated in Turkish by BCSD Turkey. She mentioned that the transition to circular economy is crucial when looked not only from the sustainability and climate perspective, but also from source management and economic continuity. Mrs. Edin completed her speech by giving brief information on the latest developments of the Project which has 35 member companies, 2 realized transactions and 57 uploaded materials as of early June 2018.

Mrs. Çalkıvik gave brief information on BCSD Turkey’s activities and made an introduction to TMM Project for the companies that recently joined the Platform.

Then Ferda Ulutaş İşevi, Technical Advisor of the Project provided information on the main industries and material flows in Turkey and the potential areas where TMM can create value.

Münevver Bayhan, the Project Manager provided information on project developments since November 2016 when the Project was launched, especially focusing on what was accomplished in order to increase the number of members and synergies.

In order to detail EBRD’s support mechanisms, Astrid Motta, the Principal of EBRD Energy Efficiency and Climate Change gave information on the recently developed benefits package for the member companies. In scope of the technical assistance, she explained “vouchers” provided for resource efficiency audits, focusing on appraisal of material exchanges opportunities. She mentioned that these vouchers cover 90% of the consultancy service costs up to 25.000€ and that there is only one voucher per member company.

New Technologies and Innovation for Synergies

The Network Meeting continued with the “New Technologies and Innovation for Synergies” session where young entrepreneurs presented the R&D they pursued and the specific products/synergies they developed with the re-use concept between different industries.

First, Abdullah Şahin from Anatolia presented how they are recovering glass and polymer from waste laminated glass.

Then, Turgut Mesut Yılmaz from Diploid Biotechnologic Products, explained how they are producing “fungisolation”, the heat insulation material from fungal cells and plant wastes by using biotechnology and green production methods.

Fourth, Elif Afacan from Episome Biotechnologies gave information on the biogas plant developed based on enzymatic pretreatment technology that solves waste problem of paper industry. She detailed the self-produced enzyme and the pilot plant installed in March 2017 that produces 110m3/tonne sludge of biogas and 330 kg/tonne sludge of fertilizer.

Beyhan Özdemir from Blue Prism explained the recycling process of waste refractors from iron-steel production and recovery of 98.000 tpy of by-products that equals to 540 million TL.

Lastly, Soner Alayurt from Hagelson gave information on their carpet recycle program and the developed recycling machine through which they get plastic granules and other non-degradable materials to be used as substitute fuel.

After the examples from entrepreneurs, three of TMM members presented their cases and explained the reason why they became members of the project. Dilda Gümüşçü from Exitcom, the first member who realized the first two transactions through the Platform, gave detailed information about these transactions with Anadolu Etap and Esan – Eczacıbaşı by emphasizing the economic and environmental benefits for both sides.

Selin Ayan from another member of TMM, Çimsa, explained the industrial symbiosis applications in Çimsa Eskişehir plant. She mentioned that the aim is to use the secondary materials and waste materials derived from ceramic & sanitary ware, tile, casting industries, brake-pad, marble quarries and glass factories in cement production as alternative raw materials.

As the third example from TMM members, Fatma Can Sağlık from Sütaş presented their sustainable business model called “From Farm to Table”. She explained the cycle where they produce not only dairy products but also biogas, plant and concentrate feed within their energy company ENFAŞ. She mentioned that they produced 83 m kWh of electric, 55 m kWh of heat, 33 thousand tons of fertilizer by the end of 2017.